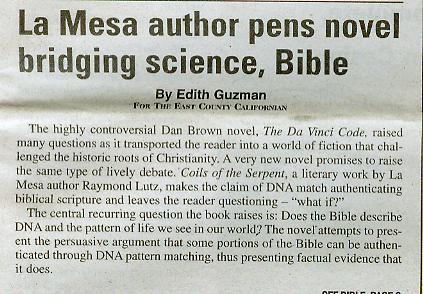 By Edith Guzman
For the East County Californian

The highly controversial Dan Brown novel, The Da Vinci Code, raised many questions as it transported the reader into a world of fiction that challenged the historic roots of Christianity. A very new novel promises to raise the same type of lively debate. Coils of the Serpent, a literary work by La Mesa author Raymond Lutz, makes the claim of DNA match authenticating biblical scripture and leaves the reader questioning - "what if?"

The central recurring question the book raises is: Does the Bible describe DNA and the pattern of life we see in our world? The novel attempts to present the persuasive argument that some portions of the Bible can be authenticated through DNA pattern matching, thus presenting factual evidence that it does.

"Each reader will have to decide how this evidence affects their own beliefs on the matter," Lutz said.

The book is 357 pages long and includes a lengthy bibliography to support the conclusions reached within.

Originally, the tome was intended as a nonfiction work, but as the story evolved, he found that it was much more powerful and compelling to present the controversial subject using a cast of fictional characters.

"Basically, my characters debate the point and reach their own astounding conclusion," Lutz said, "At the same time, the story is driven forward as a thrilling FBI murder investigation mystery."

Tamara Romeo, an advertising and marketing executive added. "The way this book ties evolution, science, and the history of the church into a tight package and then tops it off with a stunning conclusion was really quite remarkable. I really recommend this book. The story is great."

The book, without a doubt, will also create upset within many groups. It will likely upset Darwinists as much much as it does creationists and fundamentalist theologians.

Lutz, the chairman of the East County Democratic Club, revels in the challenge that he has undertaken, admitting, "comparing ancient scriptures with modern DNA science has never been fruitful before," he said. Readers could be amazed and a bit disturbed by the results of this novel.

"It was a fun way to learn about DNA and the creationism-evolution debate," said John Hughes, a retired aerospace engineer. "I thoroughly enjoyed the adventures of the three researchers and the fresh interpretation of (the Book of) Genesis."

Lutz holds a Masters of Science degree in Electronics Engineering and is active in Democratic Party politics, particularly with regard to the expansion of privatized military.

He is also knowledgeable in science, engineering and marketing. He holds several patents and has been part of numerous start-up enterprises, and is involved in the latest developments in biotechnology and physics.

With such a pedigree, perhaps this is why the main message of his novel is a historic new take of linking science to scripture. "I hope this hits a chord," he said.